In October 2011 teachers from Heronsbridge School Bridgend along with horticulture advisor Anthea Guthrie visited Kgafela and Linchwe schools in Mochudi. They were met as always with love and hospitality by the Botswana partners.

UK teachers spent time with the Kgafela students with special needs working alongside the Botswana teachers looking at communication skills, speech therapy and educational programmes/resources.  Workshops were held on assessment for learning for students with SEN based on the INSTEP programme, recording of achievement and developing target setting/ Individual learning plans.  The UK teachers also delivered training on the programming and use of communication aids and the potential of the internet for student resources and professional support and development..
The two PE teachers led fitness/football training sessions and tournaments for  SEN and mainstream students from 3 primary schools, a local secondary school and a community Academy group.
With the Waterloo Funding Kgafela Primary and the SEN Unit have cleared land, set up shading and put in irrigation for veg plots. They have planted a small orchard of citrus, papaya etc but the trees are struggling in the extreme heat and drought. They have also allocated veg areas for needy community groups such as the villagers who stomp the sorgham for school dinners.
Amazingly  the BOTAWA horticulture project has come to the notice of regional and national government officials. The official launch/opening of the project was attended by the Minister of Agriculture, Permanent Secretary for Education, the British High Commissioner and the Director of the British Council. Kgafela is the first primary school in Botswana to run a horticulture project of this kind and  the Minister declared it to be symbolic of a national drive to eradicate poverty through primary education and a step towards national food security. The pivotal role of the Waterloo Foundation funding for the project was referred to by all the speakers with many spontaneous rounds of applause and ululations!!
Mrs Pilane the Headteacher was able to report that late arrival for school and absenteeism is no longer a problem as the students arrive early to tend and water the garden. They are hopeful that this will be reflected in the academic achievements of the students later this year. Several harvests of spinach and other vegetables have already been made to supplement school dinners and vulnerable children such as those with medical needs or those who are orphans have been given vegetables to take home as well.
They still face many challenges especially with irrigation in these early days whilst they struggle to establish their fruit garden in particular. During the visit, temperatures were 40 ‘C and the students as young as 6 years were watering by hand before and after school, using old tin cans.
Fortunately donations had been made by the Cowbridge Fairtrade group so the school was able to go shopping for hosepipes and watering cans there and then!
Due to the high profile of the Horticulture launch we were also able to meet with the Director of the British Council in Botswana and requested that the BOTAWA base at Kgafela is considered as a site for one of three BC internet hubs to be set up in Botswana in the coming year. If this bid is successful it would help towards ensuring a sustainable future for our partnership with the possibility of establishing further school links for Mochudi,  Bridgend and Tanzania. 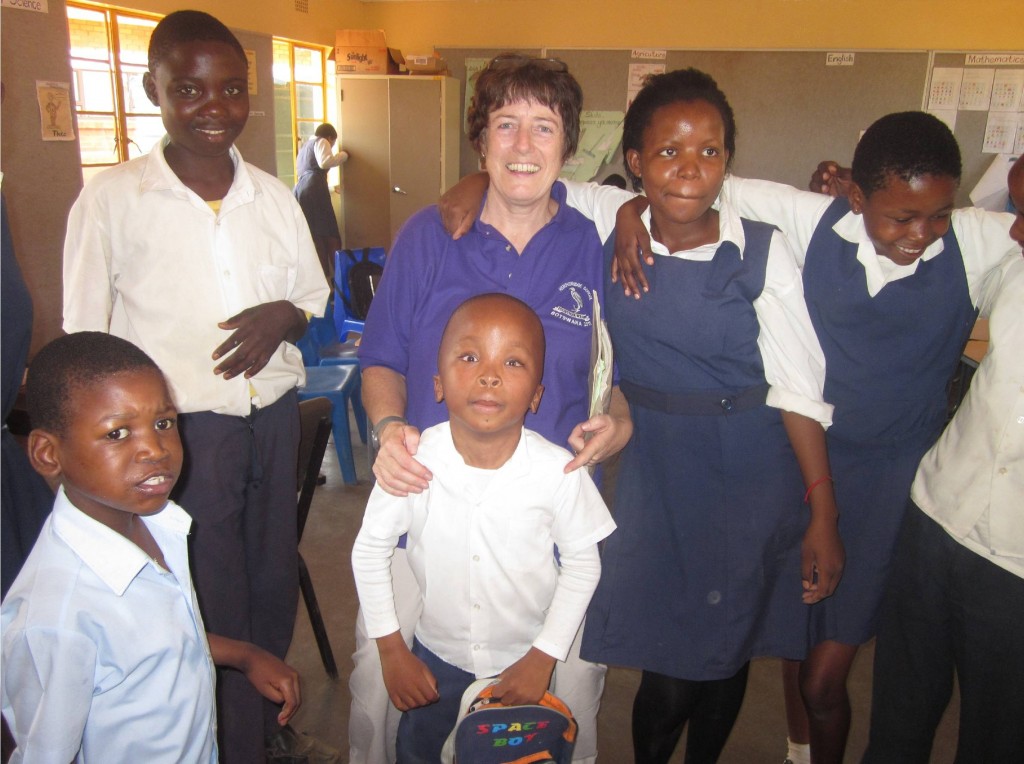 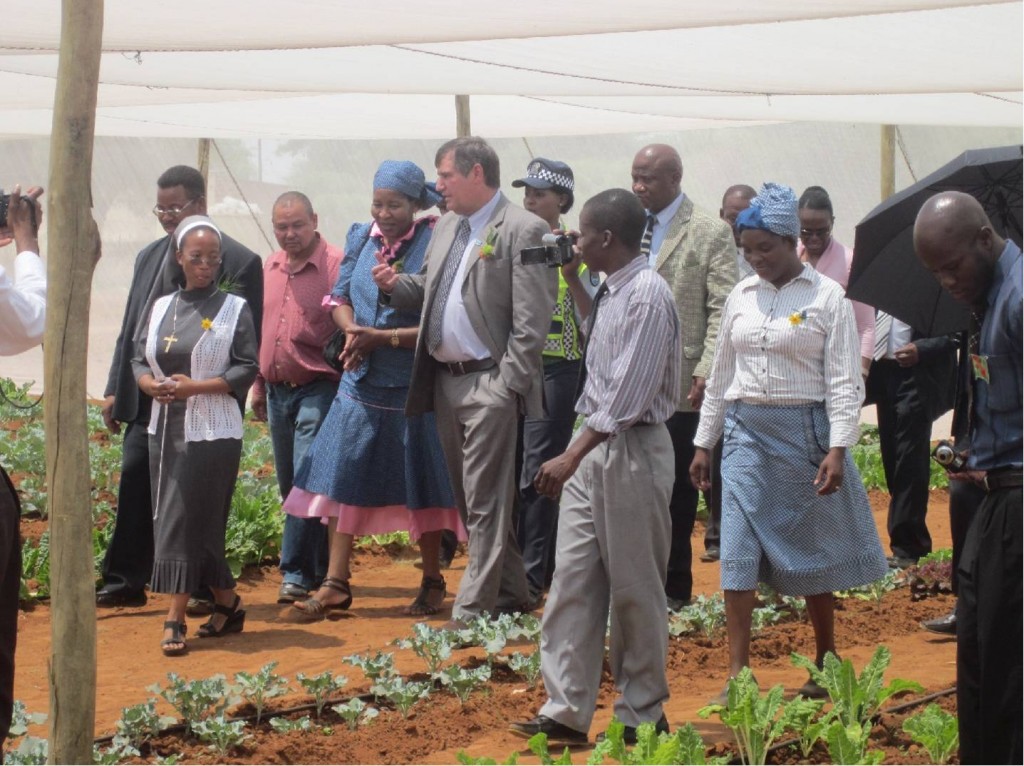 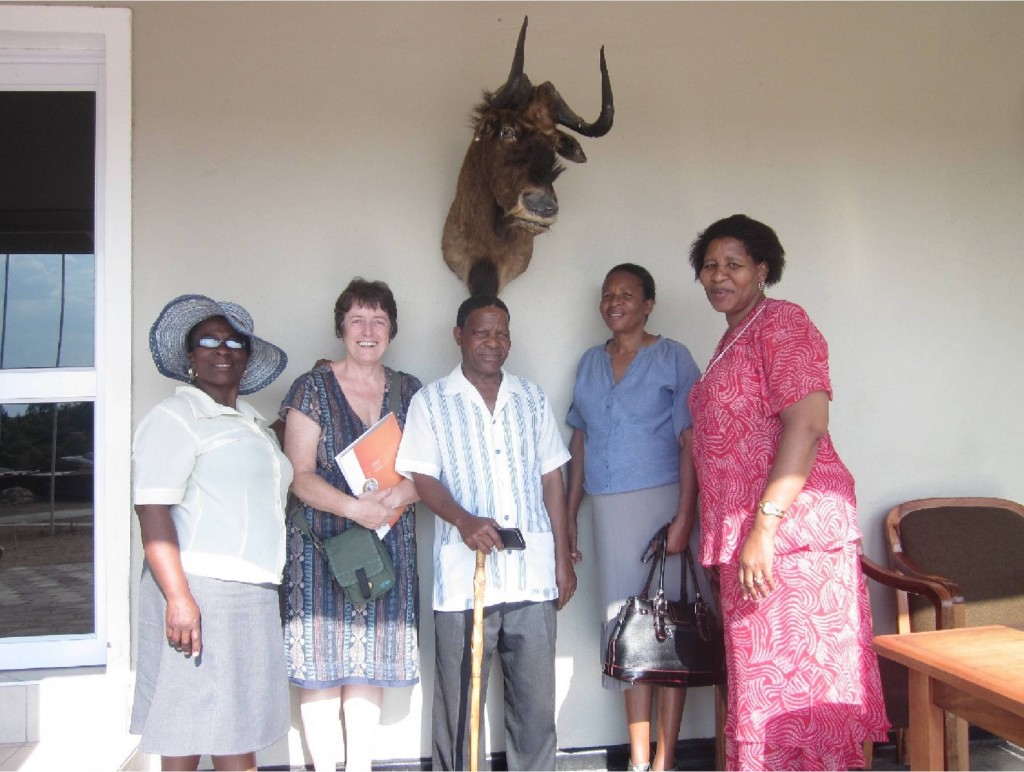 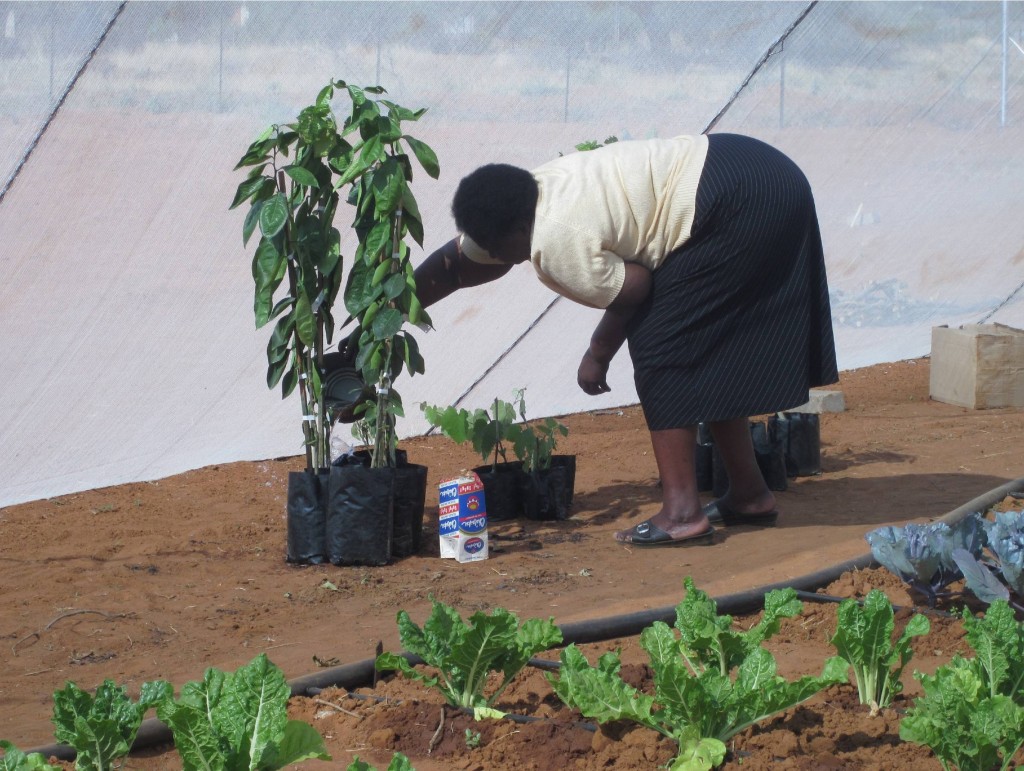 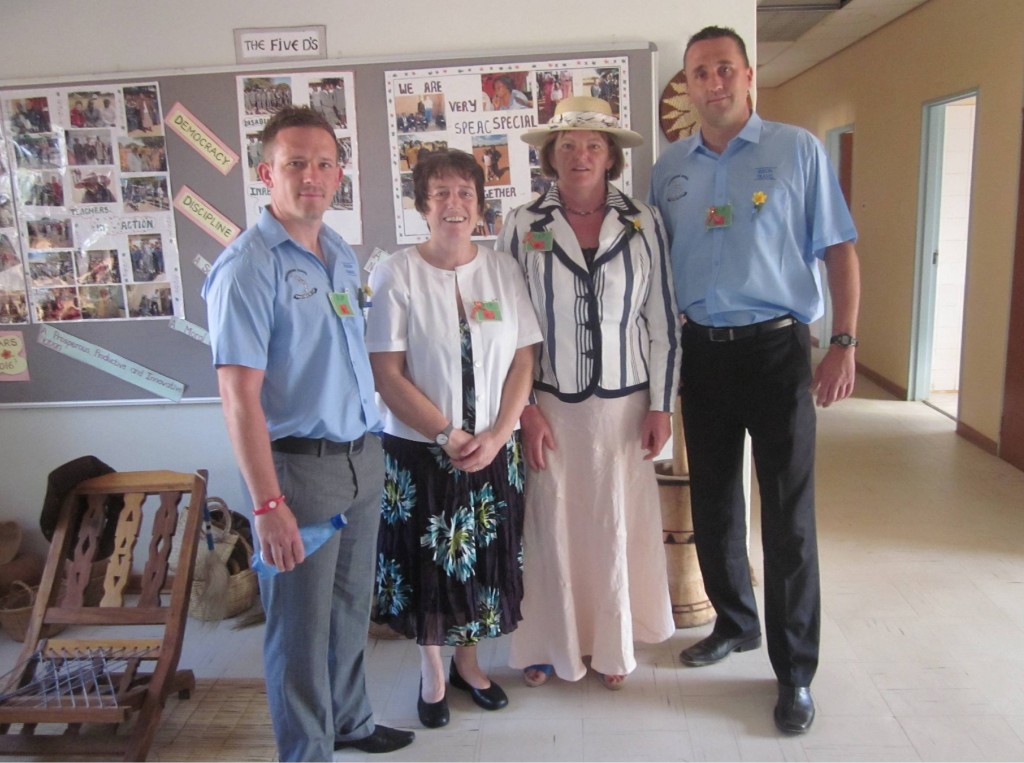 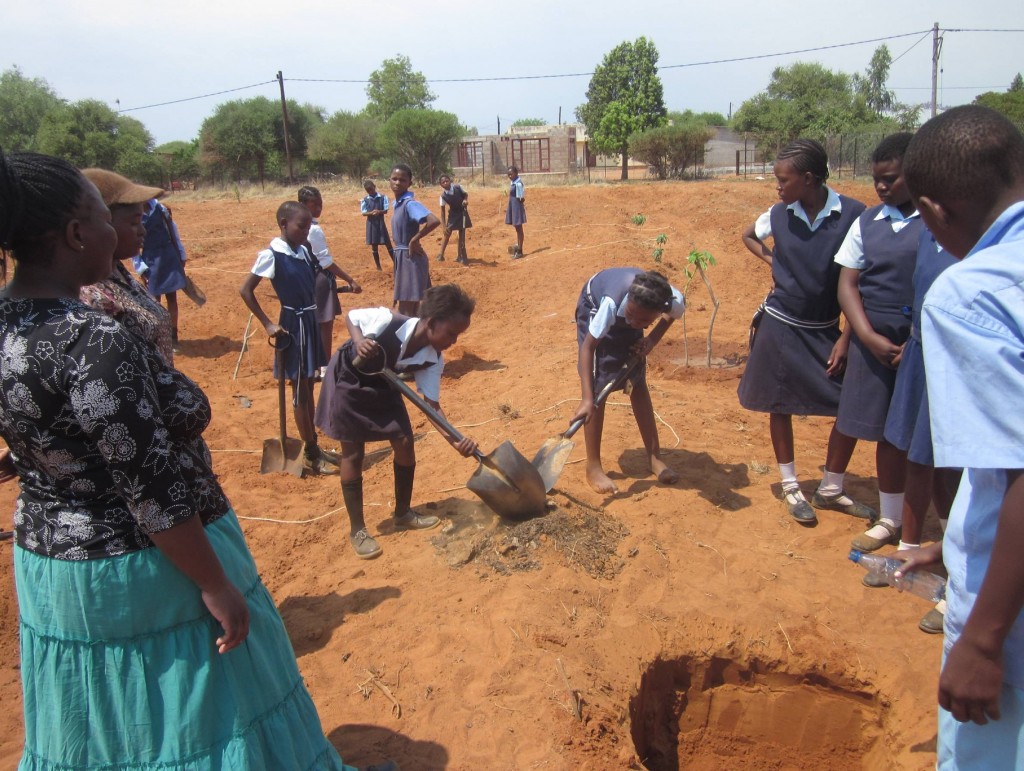 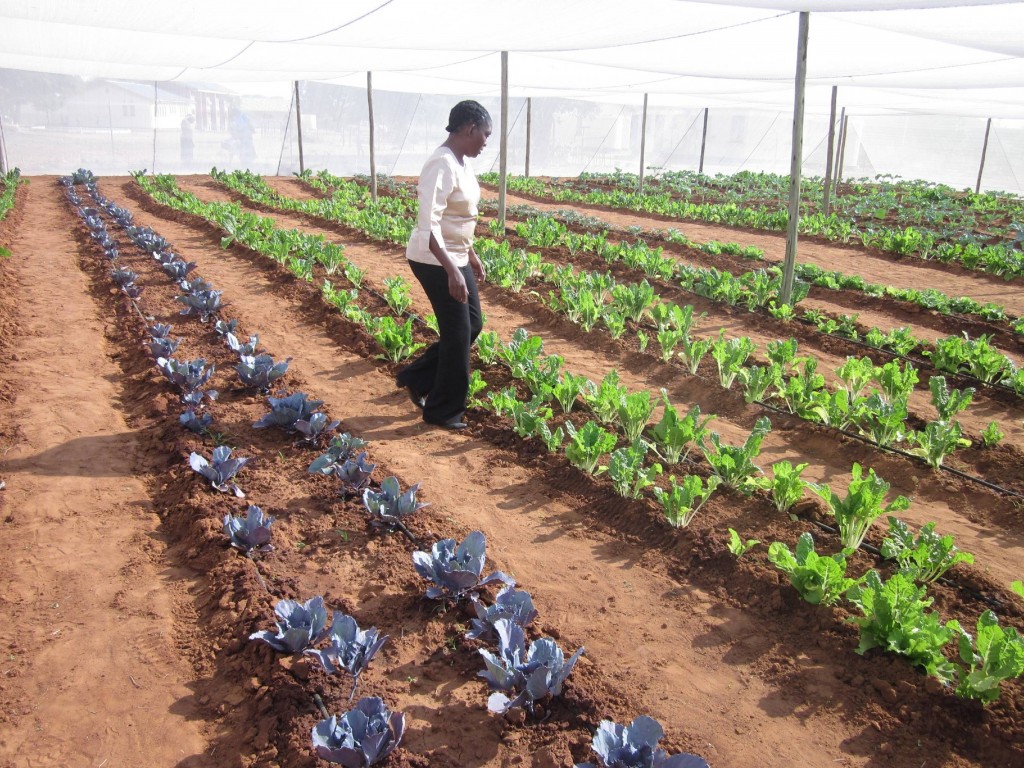